April is National Poetry Month, so what better time than now to post a poem?

I'm currently reading Donna Tartt's The Secret History, and am about 1/3 of the way through it. In the passage I read this morning, one of the characters made reference to his shabby, self-given haircut being "very thistly and childish, a la Arthur Rimbaud." I'd not heard of him, so I had to look him up: 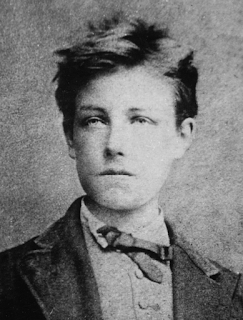 I see where Tartt was coming from.

Rimbaud had a rather short and tumultuous life, writing most of his poetry between the ages of 15 and 19, and described his poetic philosophy this way, in a letter to his mentor, when he was 16:

"I'm now making myself as scummy as I can. Why? I want to be a poet, and I'm working at turning myself into a seer. You won't understand any of this, and I'm almost incapable of explaining it to you. The idea is to reach the unknown by the derangement of all the senses. It involves enormous suffering, but one must be strong and be a born poet. It's really not my fault."

His style was a blend of classical and surreal, with seemingly-approachable poems often twisting in strange and unexpected ways. What follows are two of Rimbaud's poems - ones I find especially enjoyable.

Graceful son of Pan! Around your forehead crowned
with small flowers and berries, your eyes, precious
spheres, are moving. Spotted with brownish wine lees,
your cheeks grow hollow. Your fangs are gleaming. Your
chest is like a lyre, jingling sounds circulate between your
blond arms. Your heart beats in that belly where the double
sex sleeps. Walk at night, gently moving that thigh,
that second thigh and that left leg.


A Sleeper in the Valley

A green hole where a river sings;
Silver tatters tangling in the grass;
Sun shining down from a proud mountain:
A little valley bubbling with light.

A young soldier sleeps, lips apart, head bare,
Neck bathing in cool blue watercress,
Reclined in the grass beneath the clouds,
Pale in his green bed showered with light.

He sleeps with his feet in the gladiolas.
Smiling like a sick child, he naps:
Nature, cradle him in warmth: he's cold.

Sweet scents don't tickle his nose;
He sleeps in the sun, a hand on his motionless chest,
Two red holes on his right side.
Posted by Lyndsey at 8:58 AM

Email ThisBlogThis!Share to TwitterShare to FacebookShare to Pinterest
Labels: Poetical