Here's why, from Wikipedia:


The sentence is unpunctuated and uses three different readings of the word "buffalo". In order of their first use, these are


Marking each "buffalo" with its use as shown above gives

Thus, the sentence when parsed reads as a description of the pecking order in the social hierarchy of buffaloes living in Buffalo:


Read the entire article here. You may also want to read more about homophonous phrases.
Posted by Lyndsey at 12:55 AM 1 comment:

It's a well-known secret that the day after the Kansas City Royals win a game, Planet Sub offers their turkey sandwiches for two dollars. You have to know the secret code: ask for a Royal Turkey or you'll get charged full price.

There have been many times in the past when I wanted to know if it was a Royal Turkey day or not, but couldn't find an easy way to check. My friends (with minimal input from me) have now solved that problem.

Visit isitaroyalturkeyday.com to quickly see whether or not it is, in fact, a Royal Turkey day. Today, it is.

What do you make?

This slam poetry reading by Taylor Mali is one of the best endorsements for the teaching profession I've ever heard or seen.

Read more about Taylor and experience more of his poetry at taylormali.com.
Posted by Lyndsey at 7:12 AM No comments:

Taco Bell, I’m calling you out! Bring back the BellBeefer! 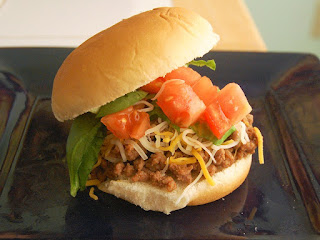 While not a BellBeefer, this is the closest image I could find to the real thing. Pictures of taco burgers are surprisingly scarce on teh internets.

Contrary to their "think outside the bun" philosophy, it's time for Taco Bell to bring back the BellBeefer, aka Bell Beefer, aka Bell-Beefer. Taco meat, sauce, cheese, onions and shredded lettuce on a plain hamburger bun equals fast-food nirvana.

Sometime in the early to mid 90's, after a several month hiatus from Taco Bell, I went through the drive through and ordered my standard two BellBeefers with no lettuce. The girl at the drive through window was perplexed. "Bell what?" she asked. "We don't have those no more." And just like that, a favorite fast-food icon was "no more".

The closest I came in recent times to getting an actual BellBeefer was a few years ago at a combination Taco Bell/Long John Silvers. I asked them if they could throw some of the taco fixin's on the buns they used for the fish sandwiches, but the half-wit behind the counter said it would "mess with inventory." Whatever. As an aside, one of the worst smells in the fast-food world is the combination of Taco Bell food and Long John Silvers food. The twain should not ever have met.

While I'm on the subject of taco burgers (and places that smell weird), I once ordered one from a now-defunct joint at Metro North Mall (what isn't defunct in there nowadays?) called Amigos. Let me explain something about taco burgers: no two places make them the same. Some have lettuce, some have tomatoes, some have cheese, some have onions. Amigos used to put some sort of Thousand Island slop on theirs. Because I could never keep straight the make-up of taco burgers across the KC metro area, I would order by telling the cashier what I wanted on my burger, rather than what I didn't want. This avoided the scenario where I ask for a taco burger with no tomatoes, only to be met with hostile confusion because the taco burger at that particular establishment didn't come with tomatoes and what kind of idiot was I, anyway? I digress.

I ordered my taco burger at Amigos thusly: "I'd like a taco burger with just cheese and onions."

The reasoning behind what happened next has been a point of contention in my household ever since. When I removed my taco burger from the paper wrapper, I was presented with a bun that had nothing but cheese and onions on it. My husband says I got exactly what I ordered, but I argue that the very nature of the term "taco burger" requires meat as a component. If I ordered a McDonald's hamburger with "just pickles and ketchup" I would expect a hamburger with pickles and ketchup - not a bun with pickles and ketchup but no meat. Needless to say, I returned it for one created the right way, but not before asking the person who took my order if they were a fucking retard. Okay, I didn't ask them that because I didn't want the extra ingredient of spit in my taco burger. I probably got that anyway, but I'm still alive, so no worries.

Anyway, I am still on a quest for the perfect taco burger, and to me, it gets no better than the BellBeefer from Taco Bell. I'll probably never see the day it makes its triumphant return, but a girl can hope.
Posted by Lyndsey at 7:31 AM 48 comments:

Anil Dash posted an article back in April titled Cats Can Has Grammar, in which he discusses the nuances of lolcat grammar. This is a must-read for those unacquainted with lolcats.

If you liked that (and even if you didn't), there's an excellent in-depth analysis of the fusion between leetspeak and image macros that has blossomed into lolcats by David McRaney over at I Can Has Cheezburger? This is a great article for anyone with interest in Internet subculture, sociology, or both.

Have you read those? Okay, you can now proceed.

BTW HUGSTIME? is system functions for determining hugs time
CAN HAS HUGSTIME?
CAN HAS STDIO?

God, I'm a sucker for this shit.

Posted by Lyndsey at 7:27 AM No comments:

Where have all the roaches gone?

The Pitch has a nice little article about the Twin Oaks that once was. Now that the whole thing is gone and work has begun to level out the foundation for a new UMKC residence hall, it's strange to look across Oak Street and see more than red brick.

I probably stepped foot in the buildings four or five times, all to work on the computers at the rental office. This was before the place was sort-of renovated, but after it was acquired by UMKC. I remember being reminded of the hotel in The Shining, and thinking that I really didn't ever want to walk down a hallway in that place alone. I drove through the underground garage once, and was creeped out by what was apparently once a gas station, and lots of eerie dark doorways that led to who knows where. But despite feeling spooked by what Twin Oaks had become, it was definitely hard not to imagine what it was in its heyday.

My husband got to tour some of the upper floors when the "renovation" was underway, and was impressed at the size of some of the units. Some apartments took up entire sides of a building, with butlers' quarters and grand entryways. These were, of course, not all that grand anymore, but again, the shadow of what they were was still there.

By Fall of next year, the property will be called Oak Street West, and will house 514 students and 5,000 square feet of retail space. While I'm sure it will be a lovely place to live, it's quite far from the university dining facilities (like the other dorms are), and, unlike Northwest Missouri State, does not have on-campus food vendors who deliver to dorm rooms. Not that this matters much to me, but I'm sure it would affect some who might otherwise choose to live on campus.

The real winner in all of this is the Kin Lin Chinese restaurant. The roaches from what was Twin Oaks have, I'm sure, migrated over that way and have probably taken the place of chicken and pork in most dishes. I can make comments about Kin Lin because I've had a couple "unfortunate incidents" involving the place:

These reasons alone are sufficient enough for me to give Kin Lin more than a little grief, but it's the fact that they use Ore-Ida crinkle fries as the primary vegetable in their Curry Chicken that really seals their fate. A few crinkle fries is okay, but 90% crinkle fries is an atrocity.
Posted by Lyndsey at 5:31 AM 3 comments: